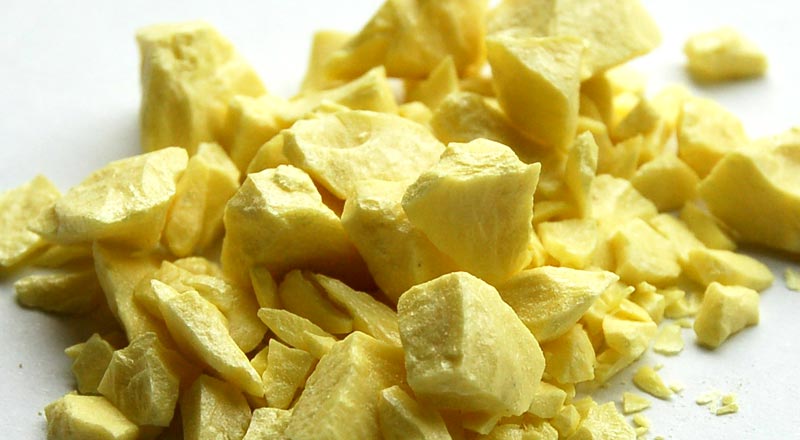 The antitumorigenic effect of sulphur on lung cancer cells

Adverse side effects of chemotherapy during cancer treatment have shifted considerable focus towards therapies that are not only targeted but are also devoid of toxic side effects. We evaluated the antitumorigenic activity of sulphur, and delineated the molecular mechanisms underlying sulphur-induced apoptosis in non-small cell lung carcinoma (NSCLC) cells. A search for the underlying mechanism revealed that the choice between the two cellular processes, NFκBp65-mediated survival and p53-mediated apoptosis, was decided by the competition for a limited pool of transcriptional coactivator protein p300 in NSCLC cells. In contrast, sulphur inhibited otherwise upregulated survival signaling in NSCLC cells by perturbing the nuclear translocation of p65NFκB, its association with p300 histone acetylase, and subsequent transcription of Bcl-2. Under such anti-survival condition, induction of p53-p300 cross-talk enhanced the transcriptional activity of p53 and intrinsic mitochondrial death cascade. Overall, the findings of this preclinical study clearly delineated the molecular mechanism underlying the apoptogenic effect of the non-toxic homeopathic remedy, sulphur, in NSCLC cells.

In the present scenario lung cancer is the leading cause of cancer-related deaths worldwide and the incidence of lung cancer has almost reached epidemic proportions in both developing and developed countries (1). Despite decades of research, the available treatment options for lung cancer patients remain inadequate, either to offer a cure or even a substantial survival advantage owing to its inherent resistance to chemotherapy. Moreover, the clinical efficacy and usefulness of chemotherapy is still limited because of its dose-limiting toxicity (2) which has considerably shifted the focus towards complementary and alternative medicine (CAM), that are low in toxic side effects (3). Among different CAM regimens, homeopathy a nearly 200-year-old system of medicine has been shown to decrease side effects of chemotherapy in cancer patients and possess antitumorigenic property (4–8). Homeopaths have described observations that tumors recede from the use of homeopathic treatment and have, from time to time, documented long-term recoveries from cancer in response to homeopathic treatment (4–6). Unfortunately, scientific studies corroborating these clinical observations are very few. There are only few reports on the mechanism of action of homeopathic drugs in experimental cancers and cell cultures (9–14).

In the present study, we investigated the basic molecular mechanism of antitumorigenic effect of sulphur, a promising homeopathic remedy, on non-small cell lung cancer cells. Sulphur, the most ancient archetype in the history of our planet, is used by homeopaths for treating inflammation and cancer and also in treating other skin diseases (15–18). Potent chemo-preventive effects have been demonstrated in various in vivo and in vitro models for sulphur-containing compounds found in naturally occurring products, such as, onions and garlic (19,20). Protective effect of sulphur has also been reported against cytotoxicity in neuroblastoma cells (21). In vitro treatment with sulphur significantly increased apoptosis in neuroblastoma cells (22). Reports have stated growth inhibitory and apoptosis-related effects of sulphur on immortalized human oral keratinocytes and on oral cancer cells (23). Taken together, these findings indicate a promising anticancer potential of sulphur. However, the underlying mode of action for its professed antitumorigenic effect in highly resistant non-small cell lung carcinoma (NSCLC) is still unidentified and requires further study. To the best of our knowledge, therefore, this is the first report delineating the detailed mechanism of sulphur on NSCLC cells.

It is well established that development and growth of tumor cells are controlled by complex signalling pathways involved in the regulation of cell death, survival and proliferation. In mammalian cells, the regulatory contribution of NFκB and p53 to cancer development and progression is well documented where inactivation of p53 and hyper-activation of NFκB are the common occurrences (24–27). It has been acknowledged that NFκB pathway activation renders inherent resistance to chemotherapy to NSCLC cells apparently via induction of survival and anti-apoptotic proteins (25,28). Therefore, targeting NFκB pathway may serve as a novel approach to regress NSCLC cells. Conversely, tumor suppressor p53, the ‘guardian of genome’ translates stress signals into cell cycle arrest or apoptosis, depending on the balance between pro-apoptotic and anti-proliferative genes (29–31). Thus, drugs reviving tumor suppressor functions of p53 will be proficient for targeted cancer therapy. Considering the deregulation of NFκB and p53 pathways in numerous cancers, including NSCLC cells, it is not surprising that extensive cross-talk between these pathways exists at various levels. In fact, NFκB activation was shown to play a role in neoplastic transformation by inhibiting p53 gene expression (32,33). Moreover, reports have shown that NFκB by inducing the E3 ubiquitin ligase MDM2 attenuated p53 protein stability (34). Furthermore, the NFκB gene promoter is activated by p53 mutants, and p52 subunit of NFκB can modulate the promoter activity of p53 target genes (34). Both NFκB and p53 compete for co-activators, for example, the histone acetyltransferases p300 and CBP (35,36). An ideal therapeutic approach should, therefore, involve tailoring NFκB-governed survival pathway in favor of p53-regulated apoptotic pathway to regress otherwise drug-resistant NSCLC cells.

The present study investigated the molecular mechanism underlying the antitumorigenic potential of homeopathic remedy sulphur, commonly known as a healing mineral. Our findings revealed that sulphur preferentially induces apoptosis in NSCLC cells sparing normal cells. Our exploration for the detailed molecular mechanism revealed that sulphur inhibits NFκB-induced Bcl-2 mediated survival pathway while triggering p53-induced Bax mediated apoptosis in NSCLC cells. In NSCLC cells, the constitutively active NFκB associates with p300 and this NFκB-p300 complex binds to the promoter region of Bcl-2 thereby leading to transcriptional upregulation of Bcl2 that in turn endorses activation of survival pathway. On the contrary, upon sulphur treatment, pro-apoptotic gene p53 gets activated and occupies p300 to form p53–p300 complex. NFκB-p300 complex formation, therefore, gets hampered and the newly formed p53–p300 complex binds to the promoter region of p53 target gene, Bax thereby leading to the transcriptional upregulation of Bax that consecutively directs activation of apoptotic pathway. Sulphur thus plays an essential role in dictating pro and anti-apoptotic permutation to create an environment conducive for induction of apoptosis in NSCLC cells.

Placebo and sulphur 6C, 30C or 200C were procured from Hahnemann Publishing Co., India. Cells were treated with sulphur/placebo of potencies 6, 30 or 200C exposure at the different concentration (10, 15, 20 and 30 μl/ml) for different time-points (6, 12, 24, 36 and 48 h) to select the optimum time required for cell killing. To understand the sequence of events leading to apoptosis, cancer cells were treated with mitochondrial pore inhibitor CsA (25 μM; Merck, Germany) for 1 h prior to incubation with sulphur.

For the determination of cell death, cells were stained with 7AAD and Annexin V-FITC and analyzed on flow cytometry (FACS Verse, BD Biosciences). Electronic compensation of the instrument was done to exclude overlapping of the emission spectra. A total of 10,000 events were acquired for analysis using CellQuest software. For the assessment of mitochondrial transmembrane potential, cells were stained with potentially-sensitive dye Dihexyloxacarbonicao cyanine (DiOC6, Merck, Germany) during the last 30 min of treatment at 37°C in the dark. Fluorescence of retained DiOC6 was determined flow cytometrically using logarithmic amplification by CellQuest software (BD Biosciences) (31).

Chromatin condensation and nuclear fragmentation was analyzed using the standard protocol. Briefly, cells were grown on coverslips, fixed with 3% p-formaldehyde for 10 min and then permeabilized with 0.1% Triton X-100 for 5 min. Cells were then incubated with 4′6-diamidino-2-phenyl-indole (DAPI; BD Pharmingen, CA, USA). The morphology of the cell nuclei was visualized using a fluorescence microscope (Leitz microscope fitted with epifluorescence illuminator through a 60× aperture oil immersion lens, Carl Zeiss, Germany). For fluorescence imaging, cells growing on a cover slip were fixed with 3% p-formaldehyde and were stained with anti-p53 and anti-p65NFκB antibodies (SantaCruz, CA, USA), after permeabilization with Triton X-100, followed by FITC and TRITC conjugated secondary antibodies, respectively and visualized with confocal microscope (Carl Zeiss, Germany) (13,37).

The expression constructs pcDNA3.0/HA-tagged IκBα-32A/36A [IκBα super-repressor (IκBα-SR), a kind gift from Dr J. Didonato, The Cleveland Clinic Foundation], pcDNA3.1-p65NFκB/p53/Bcl-2 overexpression plasmids (2 μg/million cells) were introduced into exponentially growing cancer cells using Lipofectamine 2000 (Invitrogen, Carlsbad, CA, USA) according to the protocol provided by the manufacturer. In a similar manner, p53 expression was knocked down in A549 cells using p53-shRNA (Santa Cruz) and Lipofectamine 2000 (Invitrogen). Stably expressing clones were isolated by limiting dilution and selected with G418 sulphate (Cellgro) at a concentration of 400 μg/ml and cells surviving this treatment were cloned and screened by western blot analysis with specific antibody. A549 cells were transfected with 300 pmol of Bcl-2-/Bax-/control-ds-siRNA (Santa Cruz) and Lipofectamine 2000 separately for 12 h. The levels of respective proteins were estimated by western blotting (37).

For the determination of direct interaction between two proteins, co-immunoprecipitation technique was employed (38,39). p53–p300 and p65NFκB-p300 interaction was determined by co-immunoprecipitation. Samples (300 μg of protein from the total lysate) were incubated at 4°C overnight with anti-p300/-IgG antibody and then incubated for 2 h at 4°C with protein A-Sepharose. Immunocomplexes were washed of unbound proteins with cold TBS with protease inhibitors, and pelleted beads were boiled for 5 min in SDS-PAGE sample buffer. The immunoprecipitated proteins were resolved on SDS-PAGE and analyzed by western blotting for detection of associated proteins. Equal protein loading was confirmed using anti-histone H1 antibody.

Values are shown as standard error of mean, except when otherwise indicated. Data were analyzed and, significance (P<0.05) of the differences between mean values was determined by a Student’s t-test.

The effect of sulphur, a homeopathic drug, on the viability of human NSCLC cell line (A549) and normal peripheral blood mononuclear cell (PBMC) was examined at different potencies of sulphur, i.e., 6C, 30C, 200C, where for each potency a differential dose of 0–30 μl/ml was applied (Fig. 1A and B). The percent cell death was scored by trypan-blue dye-exclusion assay. It was observed that among all the potencies of sulphur, 30C potency resulted in most significant decrease (p<0.001) in cell viability (Fig. 1A). Moreover, at 20 μl/ml dose of 30C, the percent A549 cell death reached its optimum (Fig. 1A) while under the same conditions the PBMC viability was found to be >90% (Fig. 1B). These results indicating the better efficacy of 20 μl/ml dose of 30C sulphur in A549 cell killing with minimum toxicity led us to perform all further experiments using this particular potency and dose of sulphur. The time-dependent effect of sulphur 30C (20 μl/ml), in comparison to placebo, on A549 and PBMC cells was examined at different time intervals (0–48 h) and percentage cell death was assessed. Sulphur 30C, at a concentration of 20 μl/ml, exerted time-dependent significant death in A549 cells (Fig. 1C). However, significant cell death in PBMCs was noted from 24 h onwards following the treatment